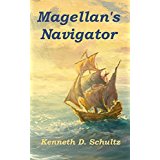 The 1000th copy of Magellan’s Navigator sold today, which is a good number for an unknown author in the nautical historical fiction genre. Furthermore, sales are accelerating! Thank you readers.

Even more than the sales, I appreciate the feedback from readers, like the gentleman who wrote me last week saying that he thoroughly enjoyed Magellan’s Navigator and The King’s Galley, and that he was looking forward to the third book in the series. This book is outlined and writing has begun. I am shooting to publish it in late 2020.

Tensions are high among the Armada of the Moluccas officers.

Soon after leaving the Canary Islands, Magellan altered the fleet’s course to a southerly one. Magellan has done so to avoid the Portuguese ships that wait ready to waylay him near the Cape Verdes Islands. When Cartagena, captain of the San Antonia and conjunta persona of the fleet along with Magellan, questions the course change, Magellan refuses to explain. And so begins the overt rift between Cartagena and Magellan.

The fleet initially makes good time, but after a few weeks, a series of hurricanes or tropical depressions hit it. They survive these only to become mired in the hot, humid tropical doldrums for three weeks. The ships barely move. The men are miserable. All fresh food is gone or rotten. The water becomes fetid.

Tempers flare. Cartagena refuses to make the evening salute to Magellan…which is a huge insult to these touchy Iberians. Cartagena and Magellan both stew about the offensive behavior of the other. The scene for more trouble is set when Anthony Salomon, the Sicilian master of the Victoria, is found committing sodomy with a grumete.

Magellan will have none of that. He convenes a trial by the fleet’s officers his flagship. Salomon is sentenced to death, although not immediately executed. After the trial, the officers discuss the course and their tedious time in the doldrums. Cartagena insults Magellan, and Magellan seizes him by his shirtfront and puts him under arrest. Cartagena appeals to his fellow Spaniards for support, but they don’t move.

Magellan has Cartagena placed in stocks on the main deck…used mainly for the punishment of drunken common sailors. Many officers are aghast at this. Finally, it’s decided Cartagena will be released into the custody of Mendoza, the Spanish Captain of the Victoria. Another of the Spanish clique, de Coca, becomes captain of the San Antonio.

Things then settle down…for now. But nothing is settled. Magellan’s mistakes will haunt him later. He could have communicated the course change more diplomatically. And then, when Cartagena is deposed, he’s placed in the custody of a confederate. It isn’t clear if de Coca was a ringleader of the Spaniards opposing Magellan, but he wasn’t definitely a friend of Magellan. In any event, Magellan should have placed his brother-in-law in charge of the San Antonio since it carried a substantial portion of the fleet’s supplies.

Finally, the equatorial current carries the fleet into the trade winds, and the fleet begins making good time towards Brazil and the next confrontation between Magellan and Cartagena.

In late summer, trade winds blow from Spain to the Canary Islands. This made the Canaries a frequent stop for mariners, including Columbus, headed to the New World. Magellan’s fleet arrived there after six days. The short voyage served as a shakedown cruise for the ships’ crew, most of whom had never sailed together before. Some of the grumetes, apprentice seamen, had never been out of sight of land.

Magellan spent three days at the port of Santa Cruz on Tenerife refilling his water barrels, loading more firewood, and purchasing salt cod. He also hired more men. Recruitment was a challenge for Magellan. The Spanish bureaucrats favored staffing their ships sailing to the New World. The multinational composition of Magellan’s crew is testimony to the recruiting challenges he faced. Apart from Spaniards and Portuguese, sailing with him were Italians from Lombardy to Venice to Sicily, Greeks, Frenchmen, an Englishman, a Norwegian, Dutchmen, an Irishman, and an Austrian as well as a few slaves or servants from India and Africa.

Also aboard was Magellan’s slave Enrique, purchased in Malaya seven years earlier at age fourteen, and listed as an interpreter. Once in the Philippines he played a major role in the armada’s fate. Interestingly, Enrique received a handsome salary of 1500 maravedis per month. That’s more than an able-bodied seaman and as much as a skilled cooper or gunner. Since he appears to have had a close relationship with Magellan, perhaps the money was indeed his.

Leaving Santa Cruz, the ships sailed to Monte Rojo on Tenerife, where they spent four days loading pitch. This prosaic substance was essential for keeping the ships seaworthy. At least twice during their voyage they careened the fleet, replaced rotten planks, and caulked seams.

An ominous visit occurred in Monte Rojo that foreshadowed the problems what would plague the fleet over the next year. A caravel arrived bearing a message from Magellan’s father-in-law. It warned him that the Spanish captains intended to kill him and take over the armada. Magellan fashioned a diplomatic reply despite diplomacy not being his strongest trait. Unfortunately, the warning was all too justified.

At midnight on October 3rd, the fleet raised anchor and sailed south. 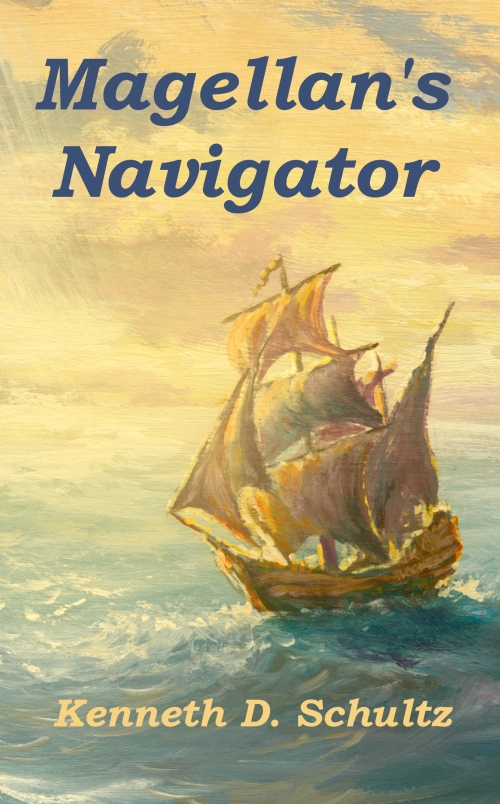 Five hundred years ago on this day the Armada of the Moluccas sailed from Spain on what was to be one of the epic voyages of the Age of Exploration. Five ships sailed with over two hundred and seventy men commanded by the Portuguese Ferdinand Magellan. Its objective? To find a westward route to the Spice Islands of the Moluccas, the sole source of cloves in the world.

The Portuguese Vasco da Gama’s pioneering route around Africa to India in 1497-1499 had reshaped the lucrative spice trade from a land and water route ending in Venice to a water route to Portugal. To date this had brought more riches to Portugal than Columbus’s discovery of the New World had to Spain. The ambitious King Charles of Spain, recently elected Holy Roman Emperor, coveted the potential gold a new route to the Spice Islands could bring.

Magellan had years of experience in the Portuguese spice trade and for a long time had dreamt of this expedition. Failing to convince his own king to commission the fleet, he successfully captured the imagination of King Charles and signed a contract with the young sovereign in early 1518. Magellan spent eighteen months purchasing and overhauling the ships, meticulously loading them with food, supplies, and trade goods, and recruiting a crew. This was done while hampered by suspicious Spanish bureaucrats.

It all sounded good. However, even Magellan didn’t knew how to get around the New World to the Spice Islands. Also, Balboa, after crossing the Isthmus of Panama, had sighted a new ocean. How far across this ocean were the Spice Islands? Consensus was that they weren’t far. This last assumption was to almost doom the expedition.

However, a more immediate problem would first arise: the flawed command structure of the fleet. On the one side was Magellan and his crusty veterans of the Portuguese spice trade. Opposing him stood three Spanish captains plotting to displace him. Between them stood the majority of the crew, men simply trying to stay alive. 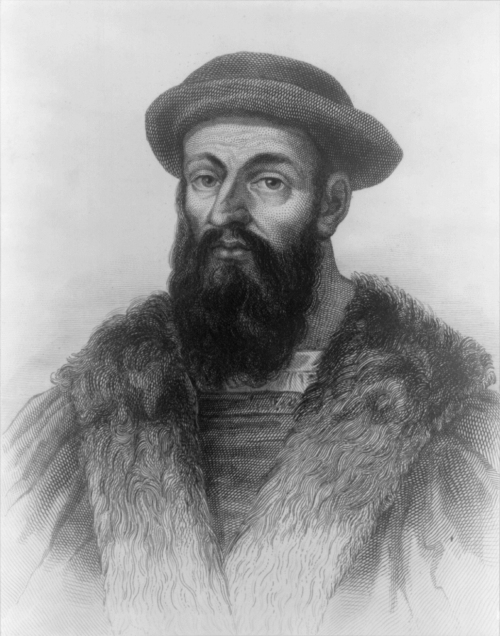 Five hundred years ago today, August 10, 1519, Magellan’s five ship Armada of the Moluccas cast off from the wharf in Seville and began their journey down the Guadalquivir River to the port of San Lúcar de Barrameda on the Atlantic Ocean. Magellan didn’t leave with the fleet as he was still dealing with pesky bureaucratic details in Seville. It was still another five weeks before the fleet departed on its epic voyage.

The five ships arrived in Seville nearly a year earlier in October, 1518. There the meticulous Magellan oversaw their complete refurbishment from the replacement of rotten planks to the caulking of their seams. Provisions for a two year voyage were loaded. These included 508 butts of wine from Jerez, 5779 maravedis worth of quite essential preserved quince, three jars of capers, and to 2138 quintals of hardtack biscuits. That’s over a hundred tons of biscuits if I did my conversion right.

Magellan had the ships ready. Unfortunately, he was already having disagreements with his Spanish captains that would fester until their mutiny in Patagonia.

Magellan’s Fleet is about to Sail (Five Hundred Years Ago.)

June, 1519. Final preparations are underway for the sailing of Magellan’s fleet to find a route to the Molucca Islands, the sole source of cloves in the world. Over a year earlier, on March 22, 1518, the Portuguese Magellan signed an agreement with young King Charles of Spain to pioneer the route. Five ships purchased in Cádiz were towed up river to Seville, and there fully refurbished. Francisco Albo, first mate of the flagship Trinidad, works by Magellan’s side on the myriad of details necessary for a successful expedition.

Things haven’t gone smoothly. Officials of the Casa de Contratación de las Indies, which oversees Magellan’s expedition, spend as much time on their own illicit dealings as readying and provisioning the fleet. Nonetheless, Magellan is only months away from sailing. Manning the fleet is a special concern. Portuguese/Spanish rivalry has led to severe restrictions on the number of Portuguese on the fleet. Cliques within the Casa want it manned by Spaniards, but recruiting Spanish sailors isn’t easy. The plague has produced manpower shortages in Spain, and with the discoveries of gold in the New World, it’s more attractive to sign on to sail there than on some unknown route to a place a sailor has never heard of and under command of a foreigner. As a result, Magellan’s fleet will sail with a dysphoria from across Europe, including men from Norway, England, France, and Greece as well as a host of Italians.

More ominously, jockeying for the fleet’s final command posts is in process. Magellan ends up saddled with several mistrustful Spanish captains with no sea experience. That sets the stage for next year’s mutiny in Patagonia and later dire consequences.